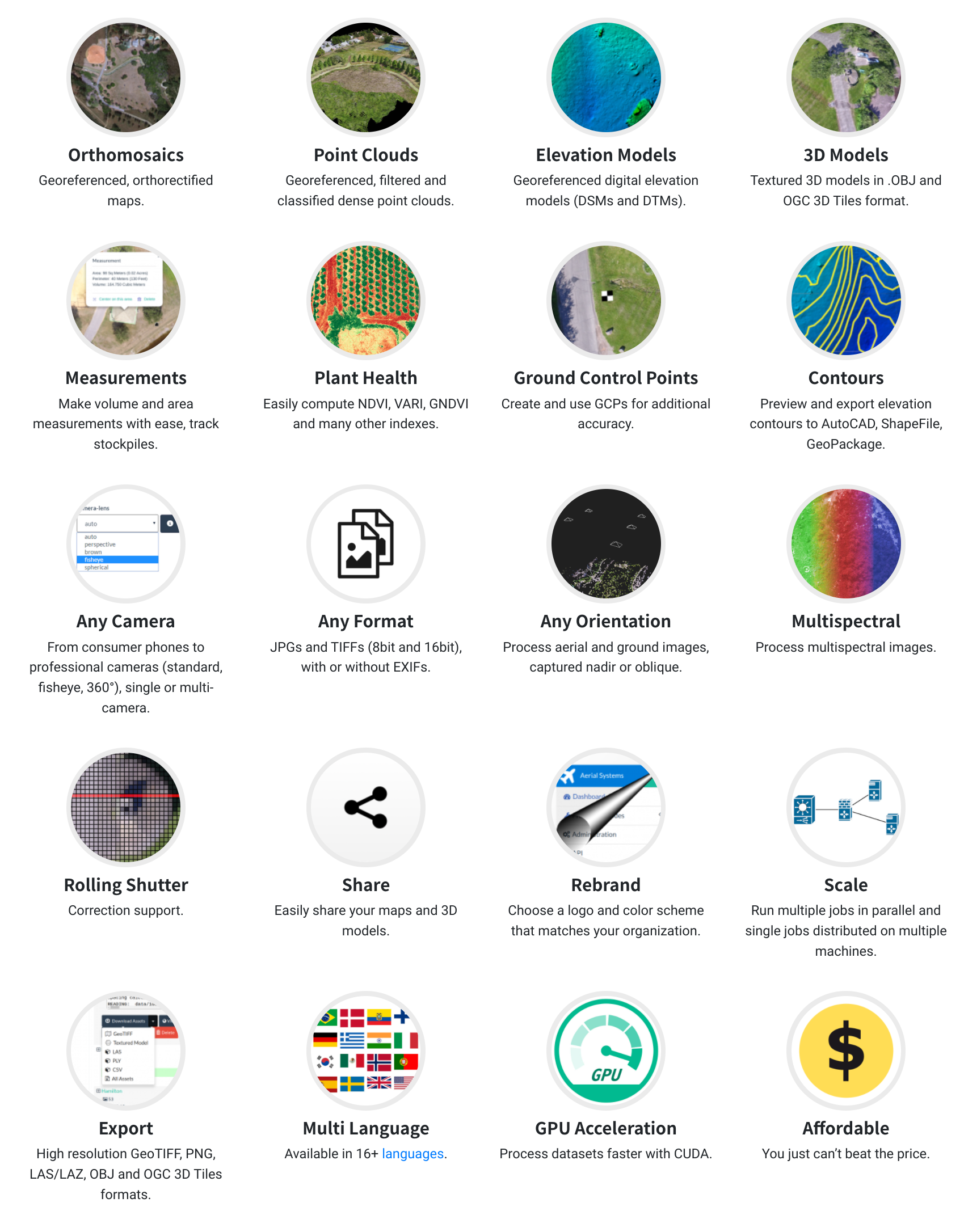 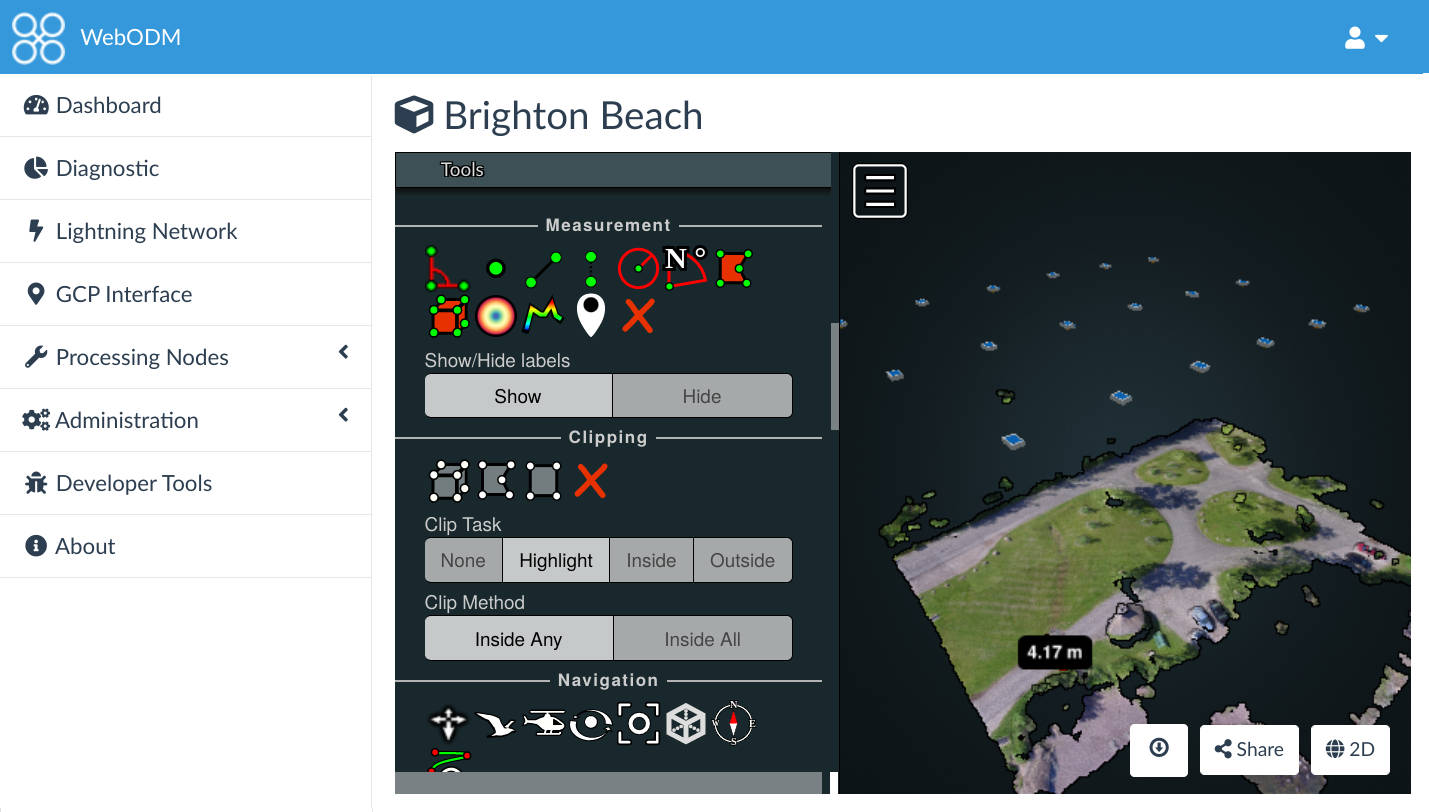 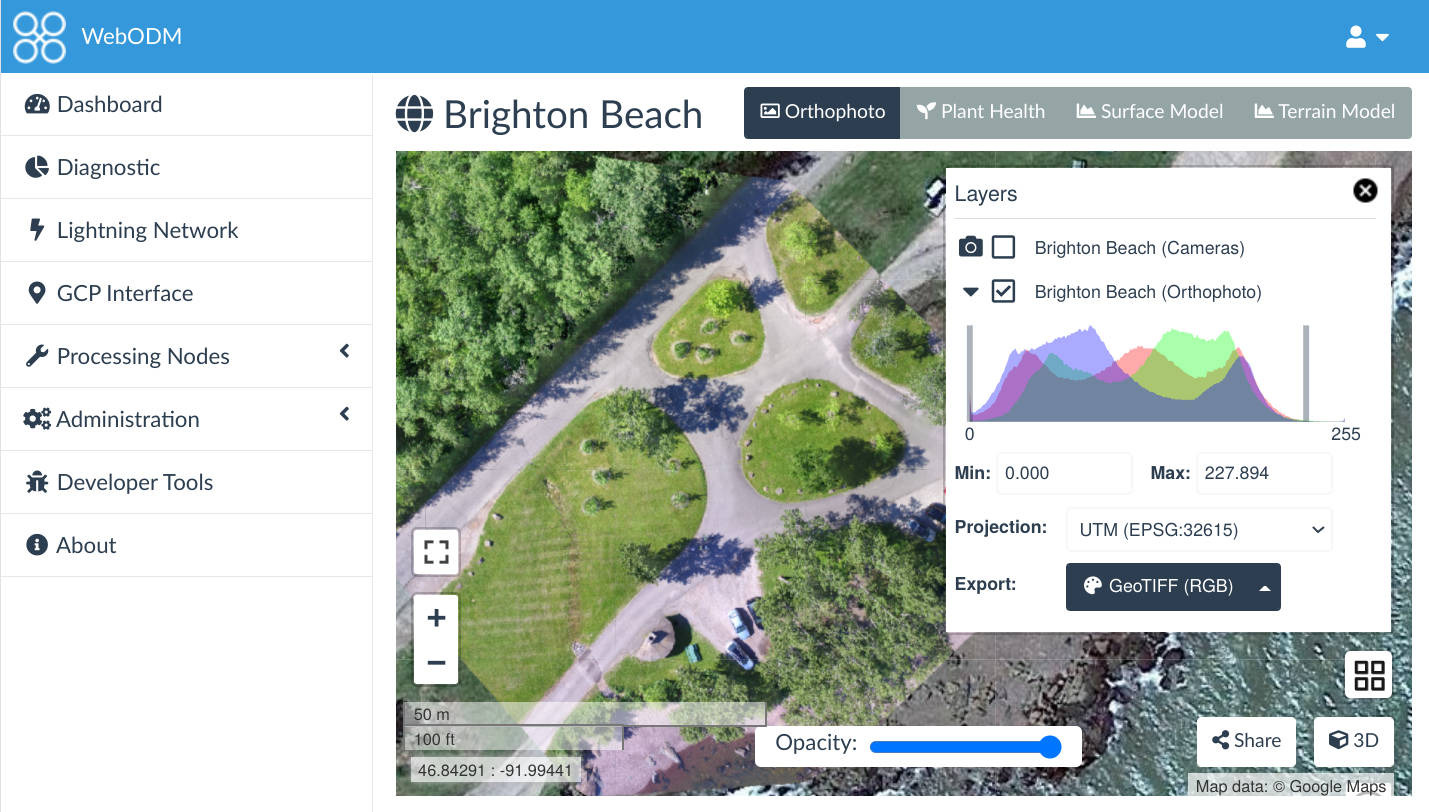 Windows and macOS users can purchase an automated installer, which makes the installation process easier.

To install WebODM manually, these steps should get you up and running:

Docker Toolbox users need to find the IP of their docker machine by running this command from the Docker Quickstart Terminal:

To update WebODM to the latest version use:

WebODM can be linked to one or more processing nodes that speak the NodeODM API, such as NodeODM, NodeMICMAC or ClusterODM. The default configuration includes a "node-odm-1" processing node which runs on the same machine as WebODM, just to help you get started. As you become more familiar with WebODM, you might want to install processing nodes on separate machines.

Adding more processing nodes will allow you to run multiple jobs in parallel.

You can also setup a ClusterODM node to run a single task across multiple machines with distributed split-merge and process dozen of thousands of images more quickly, with less memory.

Then from the web interface simply manually remove the "node-odm-1" node.

WebODM can use MicMac as a processing engine via NodeMICMAC. To add MicMac, simply run:

This will create a "node-micmac-1" processing node on the same machine running WebODM. Please note that NodeMICMAC is in active development and is currently experimental. If you find issues, please report them on the NodeMICMAC repository.

WebODM has the ability to automatically request and install a SSL certificate via Let’s Encrypt, or you can manually specify your own key/certificate pair.

That's it! The certificate will automatically renew when needed.

If you want to specify your own key/certificate pair, simply pass the --ssl-key and --ssl-cert option to ./webodm.sh. See ./webodm.sh --help for more information.

Note! You cannot pass an IP address to the hostname parameter! You need a DNS record setup.

Where Are My Files Stored?

Have you had other issues? Please report them so that we can include them in this document.

If you want to move WebODM to another system, you just need to transfer the docker volumes (unless you are storing your files on the file system).

On the old system:

In case when recovery .tar is missed, or corrupted you can conduct Hard Recovery

If you forgot the password you picked the first time you logged into WebODM, to reset it just type:

The password will be reset to newpass. The command will also tell you what username you chose.

Plugins can be enabled and disabled from the user interface. Simply go to Administration -- Plugins.

If you use docker, updating is as simple as running:

If you are running WebODM natively, these commands should do it:

To run a standalone installation of WebODM (the user interface), including the processing component (NodeODM), we recommend at a minimum:

Don't expect to process more than a few hundred images with these specifications. To process larger datasets, add more RAM linearly to the number of images you want to process. A CPU with more cores will speed up processing, but can increase memory usage. GPU acceleration is also supported. To make use of your CUDA-compatible graphics card, make sure to pass --gpu when starting WebODM. You need the nvidia-docker installed in this case, see https://github.com/NVIDIA/nvidia-docker and https://docs.nvidia.com/datacenter/cloud-native/container-toolkit/install-guide.html#docker for information on docker/NVIDIA setup.

WebODM runs best on Linux, but works well on Windows and Mac too. If you are technically inclined, you can get WebODM to run natively on all three platforms.

NodeODM and ODM cannot run natively on Mac and this is the reason we mostly recommend people to use docker.

WebODM by itself is just a user interface (see below) and does not require many resources. WebODM can be loaded on a machine with just 1 or 2 GB of RAM and work fine without NodeODM. You can then use a processing service such as the lightning network or run NodeODM on a separate, more powerful machine.

Small customizations such as changing the application colors, name, logo, or addying custom CSS/HTML/Javascript can be performed directly from the Customize -- Brand/Theme panels within WebODM. No need to fork or change the code.

More advanced customizations can be achieved by writing plugins. This is the preferred way to add new functionality to WebODM since it requires less effort than maintaining a separate fork. The plugin system features server-side signals that can be used to be notified of various events, a ES6/React build system, a dynamic client-side API for adding elements to the UI, a built-in data store, an async task runner, a GRASS engine, hooks to add menu items and functions to rapidly inject CSS, Javascript and Django views.

For plugins, the best source of documentation currently is to look at existing code. If a particular hook / entrypoint for your plugin does not yet exist, request it. We are adding hooks and entrypoints as we go.

To create a plugin simply copy the plugins/test plugin into a new directory (for example, plugins/myplugin), then modify manifest.json, plugin.py and issue a ./webodm.sh restart.

We follow a bottom-up approach to decide what new features are added to WebODM. User feedback guides us in the decision making process and we collect such feedback via improvement requests.

Don't see a feature that you want? Open a feature request or help us build it.

Sometimes we also prioritize work that has received financial backing. If your organization is in the position to financially support the development of a particular feature, get in touch and we'll make it happen.

We have several channels of communication for people to ask questions and to get involved with the community:

We also have a Gitter Chat, but the preferred way to communicate is via the OpenDroneMap Community Forum.

There are many ways to contribute back to the project:

It's easy to translate WebODM in a different language!

If you want to preview your translation work, start WebODM in developer mode:

Then edit the LOCALES file to include your translation locale code. Finally, visit the Developer Tools panel from WebODM's dashboard and press the Download and Replace Translation Files button:

The latest translation files from weblate.org will be downloaded and applied to the installation of WebODM.

The easiest way to get started is to take a look at our list of outstanding issues and pick one. You can also fix/improve something entirely new based on your experience with WebODM. All ideas are considered and people of all skill levels are welcome to contribute.

You don't necessarily need to be a developer to become a contributor. We can use your help to write better documentation and improve the user interface texts and visuals.

If you know how to code, we primarily use Python (Django), Javascript (React), HTML and SCSS. See the Development Quickstart and Contributing documents for more information.

To make a contribution, you will need to open a pull request (here's how). To make changes to WebODM, make a clone of the repository and run ./webodm.sh start --dev.

If you have questions visit us on the forum and we'll be happy to help you out with your first contribution.

The OpenDroneMap project is composed of several components.

WebODM is built with scalability and performance in mind. While the default setup places all databases and applications on the same machine, users can separate its components for increased performance (ex. place a Celery worker on a separate machine for running background tasks). 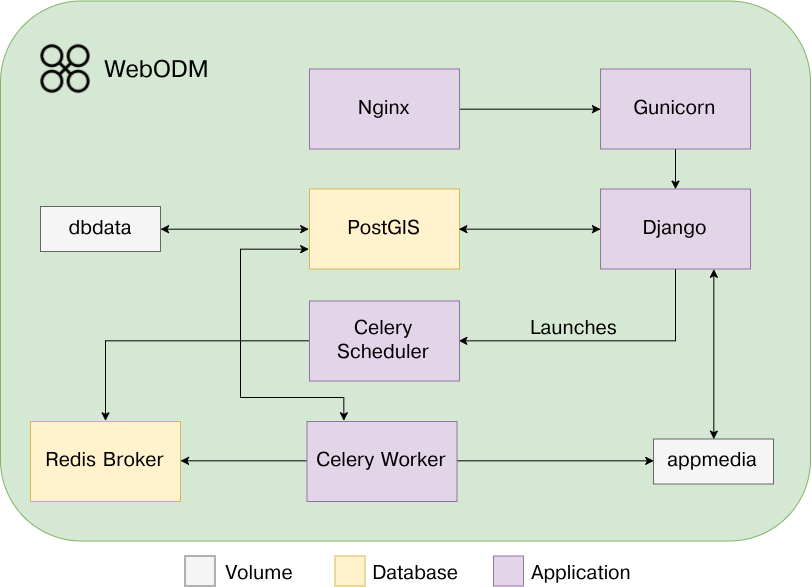 A few things to note:

Run the docker version as a Linux Service

If you wish to run the docker version with auto start/monitoring/stop, etc, as a systemd style Linux Service, a systemd unit file is included in the service folder of the repo.

This should work on any Linux OS capable of running WebODM, and using a SystemD based service daemon (such as Ubuntu 16.04 server for example).

This has only been tested on Ubuntu 16.04 server.

The following pre-requisites are required:

If all pre-requisites have been met, and repository is checked out to /opt/WebODM folder, then you can use the following steps to enable and manage the service:

First, to install the service, and enable the services to run at startup from now on:

To manually start/stop the service:

WebODM can run natively on Windows, MacOS and Linux. We don't recommend to run WebODM natively (using docker is easier), but it's possible.

Ubuntu 16.04 LTS users can refer to this community script to install WebODM natively on a new machine.

To run WebODM, you will need to install:

On Linux, make sure you have:

On Windows use the OSGeo4W installer to install GDAL. MacOS users can use:

Then these steps should be sufficient to get you up and running:

From psql or pgadmin, connect to PostgreSQL, create a new database (name it webodm_dev), connect to it and set the postgis.enable_outdb_rasters and postgis.gdal_enabled_drivers settings:

The start.sh script will use Django's built-in server if you pass the --no-gunicorn parameter. This is good for testing, but bad for production.

In production, if you have nginx installed, modify the configuration file in nginx/nginx.conf to match your system's configuration and just run start.sh without parameters.

Windows users should refer to this guide to install Apache + mod_wsgi and run gunicorn:

If you are getting a rt_raster_gdal_warp: Could not create GDAL transformation object for output dataset creation, make sure that your PostGIS installation has PROJ support:

You may also need to set the environment variable PROJSO to the .so or .dll projection library your PostGIS is using. This just needs to have the name of the file. So for example on Windows, you would in Control Panel -> System -> Environment Variables add a system variable called PROJSO and set it to libproj.dll (if you are using proj 4.6.1). You'll have to restart your PostgreSQL service/daemon after this change. http://postgis.net/docs/manual-2.0/RT_ST_Transform.html

If you are using Windows and are unable to go past the pip install -r requirements.txt command because of an error regarding zlib and Pillow, manually edit the requirements.txt file, remove the Pillow requirement and run:

On Windows make sure that all of your PATH environment variables are set properly. These commands:

Should all work without errors.

Run it on the cloud (Google Compute, Amazon AWS)

12 steps, to have WebODM running on a cloud instance.

These steps are for Google Cloud, but can also be used for Amazon AWS, and other cloud platforms with small modifications:

To setup the firewall on Google Cloud, open the instance, on the middle of the instance settings page find NIC0. Open it, and then add the TCP Port 8000 for ingress, and egress on the Firewall.